Sam Shakes was born 25th January 1972 in Hackney Hospital, London. Her father was a Jamaican who established himself as a self-employed interior decorator. Her mother was a Montserratian who worked as an office administrator for various companies.

Sam started her education at London Fields Primary School were her writing skills and imagination were discovered.

‘I loved listening to stories and making them up. Stories were out this world and anything could happen – that’s what I liked about stories.’

Her education continued at Kingsland School where she left with just two decent graded GCSE’s. Her father encouraged her to re-sit her exams at Sir George Monoux College to improve her results, but she left with similar low graded outcomes.

At the age of 16, Sam started writing journals.

‘There was something about the importance of documenting the experience of Life.’

During her time at college she worked as a Transport Assistant for the same company her mother worked for, helping with administration.

When college was over, keen to explore the world beyond the limitations of education she began to work full-time at the company. She worked there for four years and then went to work as an Order Clerk for a stationary company for five years.

Sam began to realise the lack of creativity within the mundane office world, and the importance of earning money to acquire a so-called ‘better life’ by material goods was no longer a value. Upon this realisation, she considered it worthy to return to education, with the plan of becoming an English teacher. Thus, she pursed an Access course in Humanities, at Waltham Forest College. This led to her beginning an English Literature degree, at Middlesex University in September 1997.

At the beginning of her second year (October 1998) she was hit with raging Ulcerative Colitis and was admitted to hospital. She struggled to take the prescribed medication and be well, and ended up having her colon and appendix removed in November 1998, resulting in the formation of a stoma. This was the start of a new life.

The experience led her to realise how fragile our health was, but more importantly how we treat each other in the face of trauma and struggle. She felt humanity was screaming out for attention.

Sam’s first publication ‘Then Life Took Control: A Journal from Sickness to Wellbeing’ was published in 2010. It is a three part journal for 1998 – 1999 – 2000 that reveals her steps to dis-ease and wellbeing. Reviewed in 2012, it received four out of five stars as recommended reading from the Nursing Standard Journal.

In 2014 Sam wrote ‘The Happy Man who refused Love and Help: Are you capable of murder?’ that is based on an altercation with a former partner. The intensity of anger during the explosion spurred a realisation of how the suppression of emotions can possibly led to the heinous act  of murder.

‘The Woman with a Fish in her Head: An Alcoholic or Worrier’ was published in 2016. Disturbed by the public’s response to people using alcohol (especially rough sleepers), Sam wrote this as a response to normalise the action of alcoholism, by demonstrating how ‘decent’ people can abuse alcohol. Unconsciously, it was a tale of herself, that was realised after publication.

Sam’s love of listening to stories from all, led her to publish her niece’s (Sade Oladejo) story ‘Sam Elbow – Naughty!’ Hearing wisdom from her four year old niece, Sam felt compelled to assist Sade to write her story that was published 2017. The subject of the story is bullying and has been read in schools and homes, helping to combat bullying.

Sam wrote her first script ‘Loving and Serving each other: A monologue’ for a Community Project in 2017. This script was written to improve relationships between organised religions and to promote understanding and co-existence. Her performance via a series of drama sketches received positive feedback with the recommendation to take the sketch into schools.

Supporting you and others

Sam Shakes is a self-management tutor and university lecturer and speaker with over 19 years’ experience helping people who have chronic health conditions. She’s also helped their families, friends and carers.

So, how did it all start? Well, she was enjoying work, eating (when she had time), paying no attention to her thoughts, sleeping (on average 4.5 hours), whilst her exercise consisted of walking on and off buses! She was having a good life, but hang on – her health wasn’t!

In April 1998, she was diagnosed with Ulcerative Colitis (a bowel disease) and by November, underwent life-saving surgery. This resulted in the formation of a stoma (opening formed in my abdomen) and expelling stool into a bag! It was expected that she would be on medication for the rest of her life. This couldn’t be happening! Ulcerative Colitis – surgery – medication? But it was. And what followed was a rollercoaster of depression and alcoholism. This was a tragedy and ‘bad’ news.

However, the ‘good’ news was – this was the start of a healthier and happier life! She managed the unfamiliar, unpredictable and unwanted challenges, and became an author. In her book ‘Then Life Took Control: A Journal from Sickness to Wellbeing’ you will read the small changes made that drastically improved her health. She shares her story and what she done – to inspire and motivate you to a healthier and happier life.

More good news! Through my sickness and wellbeing – she discovered painting and shares her art, and their stories to encourage change that will enhance your knowledge and improve your wellbeing.

Sam is an expert speaker and lecturer with experience of talking to diverse audiences. She’s helped hundreds of people increase their knowledge and improve their health. And would love to do the same for you, your family, friends and colleagues.

In 2017 Sam established ‘Writing about Grief – Writing for Relief: A writers group’ at St. Joseph’s Hospice for bereaved people, patients and staff. Grief stricken, Sam felt compelled to create this group after the sudden death of her former partner Philip Morgan (1965 – 2017). Writing out her thoughts and memories proved to be one of her saviours and she wanted to offer this rescuer to others.

‘I wanted to share the benefits of writing to help people grieve, create new relationships and appreciate a new and different life for themselves after losing someone.’

The writers group was a huge success with participants finding the confidence to write out their emotions, share experiences and begin to find enjoyment in their lives, again.

The work produced proved to be invaluable. Created through the pain of grief, the expressions offered wisdom, comfort, compassion, inspiration and hope. Sam encouraged the writers to publish their work, to offer the same to others who had loved and lost. Six writers were willing and the book ‘Good Grief’ was published, May 2018. 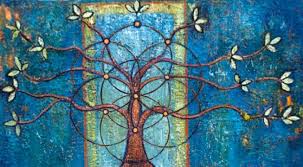 A collection of writings embracing

‘This little book is so profound – it brought a lot of solace for me.’
Anonymous
‘It’s true that everyone has to face whatever life throws at them in their own way. The book helps to do that. Good luck with it in the future.
Janet Dixon (New Zealand)
‘Dear Sam and writers: well done! What a truly wonderful concept. It was heartfelt and the stories were very heart-warming indeed. Keep up the “fab” work! Thank you’.
Marcia, St. Joseph’s Hospice

Over 200 copies have been sold!

In 2012 Sam worked with Kindred Minds (MIND) facilitating a mental health support group. She included Creative Writing to encourage people to identify their ‘unhelpful’ and ‘helpful’ behaviours; and to explore their creativity through story-telling, poetry and prose.

‘With writing we can set free our authentic selves. Even when we write something that is supposedly not about us, unconsciously we are revealing ourselves, because we created it. And, there is often an instantaneous relief after writing, such is the power of this ‘therapy.’